The History of BMW

Are they the Best Motors in the World? Some say they are and a century-long focus on precision engineering offers an argument in support of the opening statement but regardless of whether your preference is for fire-breathing Italian V12s or ruthless German efficiency, BMW holds a special place in the history of the motor car. Here, we take a look at the history of BMW and one of the most instantly recognisable car marques in the world.

As you’ll know by now through reading these blogs, Mike is a big BMW fan. His M3 CSL is one of the best examples in the country and as a testament to his love of all things ‘M’ he had a meet at the unit and the cars on display would look great in any garage!

Like many of the world’s most famous automobile manufacturers, cars weren’t top of the list at the outset. In March 1916, Bayerische Flugzeugwerke was founded (most famous for the development of the Messerschmitt) and shortly after, rumours of a push into car building prompted a name change to Bayerische Moterenwerke, or as we know it today, BMW.

The same year, the world-famous badge, mimicking the movement of a white propeller on a sky-blue background was introduced and in 1919 making planes, the BMW IV six-cylinder engine achieved an altitude record of 9,760m.

After the R32 motorcycle was launched in 1923, the company continued to manufacture aircraft engines until 1928 when they launched a licensed version of the Austin Seven known as the Dixi 3/15 PS. It went on sale in 1929 as the BMW 3/15 PS DA 2 and further versions over the next few years, including a beautiful roadster called the 3/15 DA 3 Wartburg and a DA 4 version with independent front suspension, helped to keep the company afloat during the Great Depression.

As the business headed into the 1930s, their 70-year love affair with racing started. In 1933, BMWs first inline six-cylinder engine made its debut in the 303 and with it came the first iteration of the kidney-shaped radiator grill and a 1.2-litre engine delivering 30 bhp and a top speed of 56 mph (90 km/h). But it was in 1936 that the world stopped to take notice of the small German car maker. 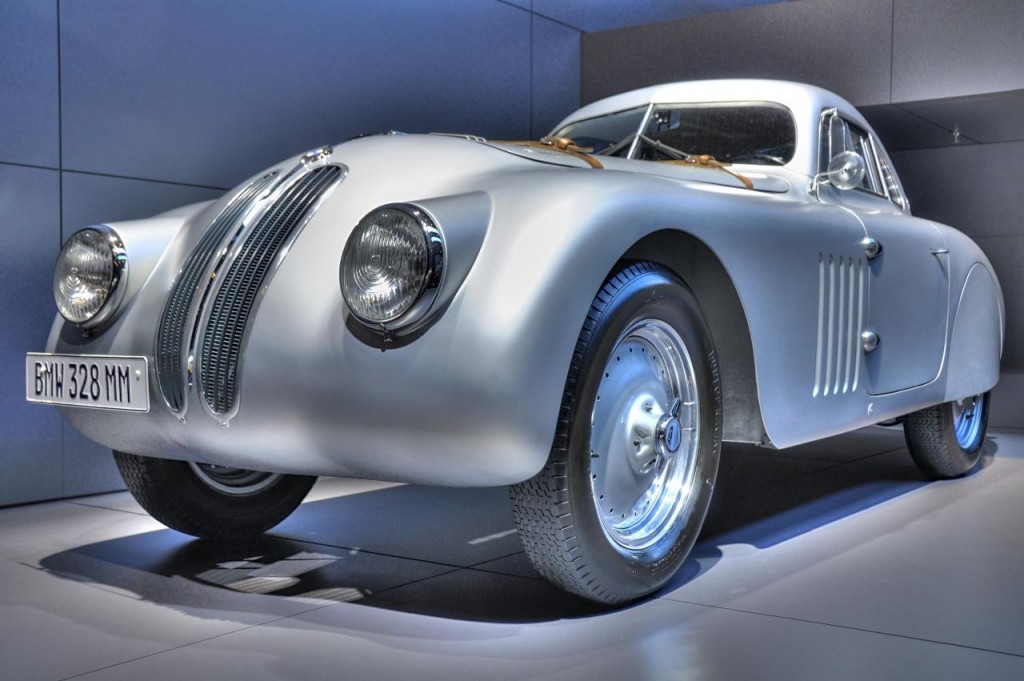 The BMW 328 was a stunning car and for the rest of the decade, set the standard for 2.0-litre sports cars. Its race debut was at the Nürburgring and was virtually unbeatable in its class, winning the famed Mille Miglia in 1940 and its sleek lines, headlights and design elements set design trends that lasted well into the 1950s.

After car production was halted in 1941 in favour of the R37 Wehrmacht military motorcycle and the 109-103 jet engine for the ultimately unsuccessful war effort, it wasn’t restored until as late as 1948.

The 1950s weren’t too kind to BMW. As most of Europe and Germany in particular suffered under the crushing weight of a post-war depression, the six-cylinder BMW 501 luxury sedan was supposed to herald a new beginning for the company. The first BMW to be built entirely in Munich, it was followed up in 1954 by the 502, the first car to possess a lightweight V8 alloy engine and then two years later by arguably one of the most beautiful cars ever produced, the masterpiece that was the BMW 507.

A rival to the legendary Mercedes 300SL, it was designed in under a year by Albrecht Goertz and its movie-star good looks inspired a generation of roadsters including, by the looks of it, the Corvette and the Cobra. 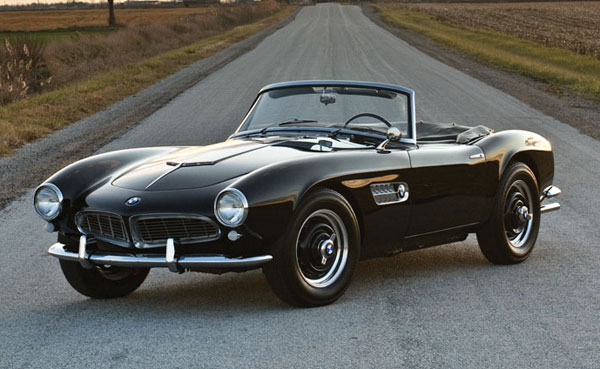 The end of the 1950s and the beginning of the 1960s saw a period of financial turbulence with the company on the brink of a takeover by Daimler-Benz but in the mid-60s, the game changed.

The company was still reeling from the devastating effects of the war and were sitting a distant third behind Mercedes and Volkswagen in the German car hierarchy. They needed to do something radical to turn their fortunes around and they came up with the 2002.

Not only was the 2002 a fast, lightweight, agile car, it redefined an entire genre – they ushered in the compact sports sedan and it’s no understatement to say that without it, BMW may have been consigned to the history books.

It was introduced into the US to compete with the huge-engined gas-guzzlers and one importer suggested dispensing with the rear doors and cramming their biggest engine – from the 1500 – into it. It produced 130bhp and an 8.2sec 0-60 time which is fair even by today’s standards and with the interior similar to the original 3-Series and the front end given a nod in the new 1-Series, it was the car that saved BMW.

As we’ve mentioned, BMW’s motorsport heritage dates back 70 years or more but come the mid-80s, there was one car that was blowing the competition away. After flirtations with the M1, the M5 and the M635CSi, but it was the original M3 (E30) that captured the hearts and minds of a generation.

As well as being one of the most successful touring cars ever, the original M3 was a thoroughbred race car for the road. With competition including the Mercedes-Benz 190E 2.3 16V and the Audi Quattro, it needed to be good and it was. Very, very good.

The 2.3-litre inline-four developed 197 bhp and a 0-60 time of just over six seconds but more than just numbers, the car produced, according to motoring journalist Amos Kwon, ‘a distinctly pure and visceral driving experience that remains largely unmatched today.’

Five generations of stunning M3s followed but it has now been replaced by the M4 and as car lovers we were say to say goodbye! Let’s hope the M4 can do what the M3 did. It’s a tall ask….

Throughout the 1990s and 2000s, each of the ranges were continually upgraded and improved as well as the introduction – albeit brief – of the 8-Series. The cars got progressively more refined and redesigns were common. Sports cars like the Z3 and Z4 were introduced as well as 4×4 crossovers like the X3, X5 and X6 and the entry range 1-Series but today, BMW are going green.

The futuristic flagship i8 is described by BMW themselves as ‘a truly revolutionary vehicle – the first sports car with the consumption and emission values of a compact car. With its innovative construction, ground-breaking use of materials, aerodynamic design and wealth of intelligent BMW EfficientDynamics features, the BMW i8 is progress in motion’ and it’s hard to disagree. 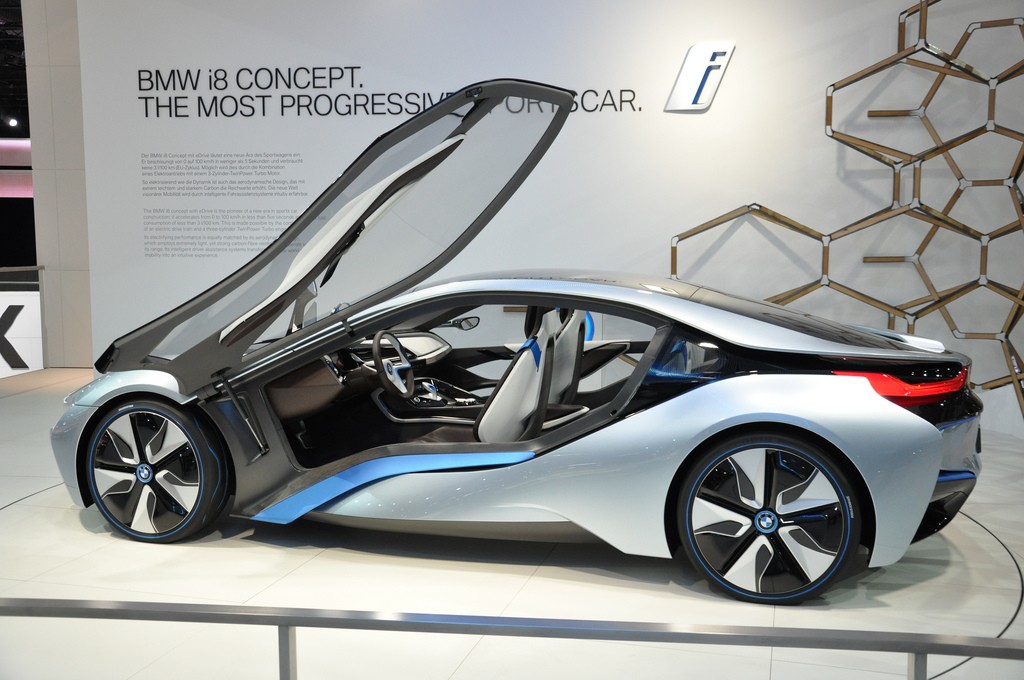 In exactly 100 years, BMW has gone from making bits for aeroplanes to designing and building some of the most iconic cars in automotive history and a full-throated commitment to precision engineering above all else has paid off handsomely. A BMW really is the Ultimate Driving Machine.